Stacy Watson, Director, Economic & Industrial Development at the Georgia Ports Authority gave an update on the Northeast Georgia Inland Port that is being developed in Gainsville, Hall County, just minutes from Jackson County, Georgia. Stacy made the trip north to Jackson County from his home in Savannah, Georgia just to share the latest news on the Northeast Georgia Inland Port with the local business community.

Northeast Georgia is the Perfect Location for an Inland Port

When you put the pieces together, you see why Jackson County has attracted the attention and investment of Class A commercial real estate developers, like those that are members of the Jackson Alliance  – Jackson County, Georgia’s central Economic Development Organization.

Stacy said, “You guys are about to become part of the Georgia Ports Authority family. Driving through the area, I was able to see a lot of our customers that use the Garden City Terminal in Savannah, GA. With all the developers that are building, and all the manufacturing that’s taking place – it was a no brainer for the Georgia Ports Authority to come to the Jackson County area. 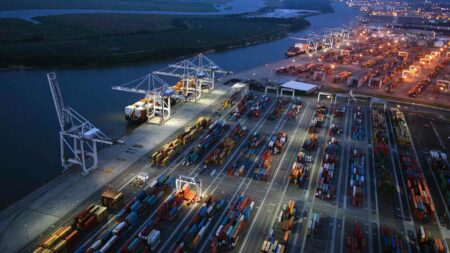 The Port of Savannah has a HUGE economic impact on Georgia

Stacy went on to share some other impressive stats about the Port of Savannah and the Port of Brunswick.

Stacy went on to say, “we do about 65% of our business with Asia, including China, Japan, and SK Innovation’s home country, Korea.”
Now that the Panamax Canal has completed its huge upgrade in the size of container ships they can serve, Asian Countries are looking more to the East Coast of the U.S. which is densely populated and growing (especially the areas surrounding Atlanta, Georgia)

“The Port of Savannah is the 4th busiest Port in the U.S. and the fastest growing. Why? Because we’re about 100 miles closer to Atlanta than any other U.S. port. We’re the most Westerly Port on the U.S. East Coast.”

Shipping products via container ship is much less expensive than shipping those same products by truck, which is why the Asian Countries are so focused on the Port of Savannah – they can keep their products on the water longer which reduces transportation costs.

Stacy said, “Every major Carrier Calls on Savannah. The Port of Savannah has 35 weekly vessel calls from carriers that are covering the world. The Garden City River Terminal is second only to the Ports of New York & New Jersey, which is at 36.”

Q. How much does the City of Savannah like the Port? Does the Port cause a lot of problems for the community, such as traffic?

Q. When will the Northeast Georgia Inland Port be operational?

A. Norfolk Southern’s wise decision to move to Georgia was for the same reasons that so many other companies are also coming to Georgia, such as access to a qualified workforce with reasonable wages/benefits, the thriving business climate, ease of moving product via rail, the huge network of customers/suppliers in the region, etc. Norfolk Southern is a GREAT company to work with, and we’re excited to get to work with them a little closer now that we’re all in Georgia.

Q. Will the Northeast Georgia Inland Port handle anything other than containers, such as break-bulk or Ro/Ro?

A. Currently, the Northeast Georgia Inland Port is strictly containers. Unless something changes, that is the plan going forward.

All Good Things Must Come To An End

Stacy ended by saying “You should feel confident we (Georgia Ports Authority) will do everything possible to make the Northeast Georgia Inland Port a huge success. I look forward to working with more customers from the Greater Jackson County Region.”

The event, titled “Business & Breakfast” is put on by the Jackson County Area Chamber of Commerce, and is a monthly breakfast meeting with a keynote speaker. The speaker typically will address some of the most pressing issues facing members of Jackson County’s business community; such as the Northeast Georgia Inland Port.